We received 25ml amniotic fluid sample requesting Karyotyping and FISH 21 test. Indication was specified as high nuchal translucency (NT) in ultrasound. In addition the requisition form also mentioned that biochemical screening result showed high risk for Down syndrome. Scan details and screening test results were not provided with the sample. Lab generally assumes that there is no family history in such cases.

The received fluid sample was divided between cytogenetcis lab for Karyotyping and molecular cytogenetics lab for FISH 21. As cell culture of amniotic fetal cells is required for chromosomal analysis, karyotyping result would take anywhere from 12-14 days. Meanwhile FISH test, performed on interphase (resting) cells of amniotic fluid was done and report was available in 2 days. FISH 21 test result showed a normal result. The figure below shows two fluorescent probes hybridized to chromosome 21 ruling out trisomy 21. 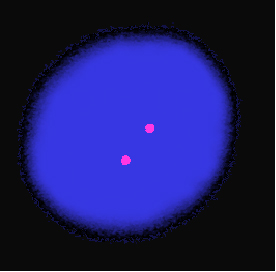 The karyotype result to our surprise showed Trisomy 13 (not trisomy 21) and the result was immediately communicated to the physician. The pregnancy was terminated and post termination features noted in the fetus were cleft lip and palate, polydactyly and rocker bottom feet. 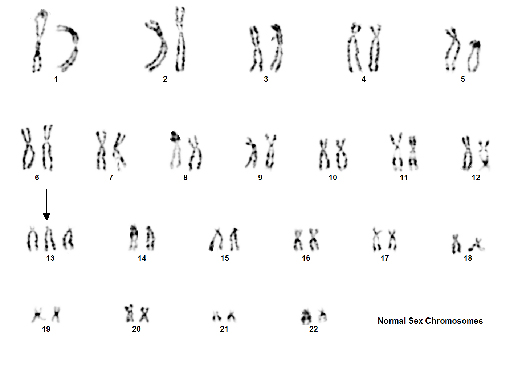 This case demonstrates that elevated NT is not just a marker for Down syndrome but also a marker for other trisomies like Trisomy 13. The discussion below gives comprehensive information on association of high NT with spectrum of genetic conditions in fetus. Importance of genetic counseling in such cases is emphasized. Families will benefit by physician’s guidance based on the understanding of overall risk rather than just confining to Down syndrome risk.

Nuchal Translucency is the normal fluid filled subcutaneous space between the back of the fetal skin and the overlying skin. It’s measurement involves measuring the back of the fetal neck between 10 weeks 3 days and 13 weeks 6 days, and then comparing the measurement to NT nomograms at a given gestational age. NT detection by ultrasound has emerged as a powerful prenatal screening strategy to diagnose a myriad of syndromes (Salman Guraya 2013). 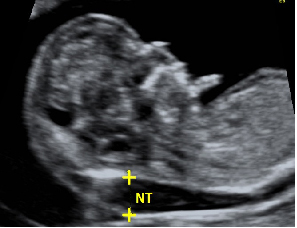 The role of increased NT as a risk factor for Down syndrome in fetus is well known. The most popular first-trimester Down syndrome screening protocol includes three independent markers: maternal serum levels of PAPP-A, free or intact hCG, and measurement of fetal NT (Smith 2008). A fourth marker, measurement of nasal bone is also used in some screening programs; however more evidence based studies are needed to validate its importance.

The wide range of risk discussed cannot be ruled out by FISH test, emphasizing the importance of fetal karyotyping which rules out all numerical and structural abnormalities of chromosomes and not just common aneuploidies detected by interphase FISH test. Irrespective of undertaking FISH test or not Karyotyping is a standard recommendation for fetuses with increased NT and high risk trisomy cases.

Although the commonest association of NT is with chromosomal defects, in fetuses with increased NT and a normal karyotype, the risk of an adverse outcome remains due to various other risks involved. Risk generally increases with increasing NT. (Salman Guraya 2017).

The role of genetic counseling is crucial in cases with increased NT. In addition to ruling out aneuploidy by FISH, karyotype of the fetus must be done to rule out structural abnormalities. Fetal outcome is favorable in the absence of any identified abnormalities and with resolution of NT thickening in the progressive scans.